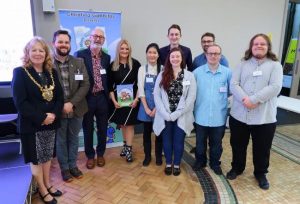 Children’s author and speaker at the Royal Armouries ‘Reach Out, Speak Out’ conference from Selby has teamed up with students to launch an animated project and help young children speak out about abuse.

Christina Gabbitas wrote Share Some Secrets to help children in primary school understand the difference between good and bad secrets, and encourage them to speak out if abused.

The book has been supported by the NSPCC, and thanks to a team of nine animation students from Sheffield Hallam University and studio Cosmic Monocle – set up by two recent graduates, Liam Hall and Dan Hodgson – the new digital animation has been created to spread the word further.

Christina visited the university last week to officially launch the animation, at a special event which was also attended by the NSPCC.

She said: “We teach our children to look out when crossing the road and we teach them to swim to keep them safe in the water. We should be educating our children about not keeping secrets that would be better shared and give them the confidence to speak out. We don’t want children to harbour secrets that will have a detrimental effect on the rest of their lives.

“I wanted to give children from all backgrounds an equal opportunity of utilising the resource for free. Some parents won’t want a book in the home like this, as a high percentage of abuse happens within the home environment. This resource encourages the children to reach out and speak out.”

The animation also includes a link to Childline, and an arrangement is in place that will see proceeds given to the children’s charity once a certain number have been reached.

Christina has also donated 100 books to the NSPCC, which have been used in schools around the country, but she said “if money was no object, I would ensure every child had a book”.

She said: “Sheffield Hallam’s animation students have brought Share Some Secrets to life with their short film and we hope this will mean more children, who may not read the book, will see it and understand the messages behind it, encouraging them to speak out.”

Mikey McCulloch-Holmes, a third-year animation student who worked on the project, said: “It was a really interesting project to work on. It’s an important book that needs to share ideas with young children in a simple but friendly way, so we had to make sure the animation struck the same tone.”

The event also included a Q&A session with Christina and the animators, and an introduction by the Lord Mayor of Sheffield.

You can watch the animation, and find out more about Share Some Secrets at sharesomesecrets.com